Maharashtrian cuisine has variety of flavours, right from simple dishes like varan bhat, potato bhaji to spicy add-ons like mirchi thecha to the sweet and simple shrikand and the elaborate to make yet tasty puran poli. Maharashtrian dishes boast an extensive use of onion, garlic, roasted peanuts and coconut and their special trademark black masala known as Goda masala. The sweet dishes mainly comprise of jaggery and coconut and coconut milk.

The staple food of Maharashtrians are rice or flat bread called chapatti or phulka or bhakri made of jowar or bajra or ragi, they cook the accompaniments to go with it. Like rassa goes well with rice as it is thin and gravy type, phulka or bhakri can be eaten with barli vangi or missal.

Be it vegetarian or non-vegetarian dish, one sees extensive use of coconut and/or peanuts along with onion or garlic in their cuisine. Some find Marathi cuisine very elaborate and spicy but once you taste their dishes you’ll be going back for more.

It’s an all-time favoruite snack of all Marathi people. Infact anybody who has been living in Nashik for a long believes Nashik is a perfect Sunday breakfast. It has a spicy gravy of sprouted cereals and is served with raw onions and fried sev or farshan and chopped coriander on top with lemon wedges on the side to add a tantalizing taste to the dish. It is eaten with pav or soft round bread. Some serve it along with curd to cut down its level of spiciness. A word of caution… it’s extremely hot and only those who can handle raw green chillies and a whole lot of heat must try at their own risk. Basically it is a side dish served with chapatti or bhakri when there is nothing to go with it. It is made either from roasted green chilli or red chilli, in little bit of oil and ground into coarse paste with roasted peanuts, garlic and salt. Each family has a different variation of this recipe. Some add roasted cumin or jeera, some add coriander leaves some don’t like peanuts and made only from chilli and salt. A dish with lots of variation… how to have it? Well, the choice is yours. 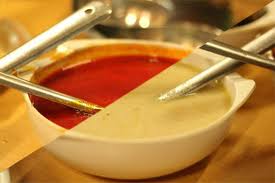 It’s a spicy mutton gravy dish, originated from Kolhapur. Often goes well with rice. Tambda as name suggests is red gravy made from red chillies, while pandra rassa is white in colour and has coconut as base, whereas vrahadi is chicken gravy. No one can resist this dish. Though bit cumbersome to make initially, but when you dig your teeth into this soft dal and jaggery stuffing, with hint of cardamom and nutmeg filled in roti dipped in clarified butter, you won’t mind having slogged in kitchen for it. Thalipeeth is a kind of snack which Marathi people usually have for breakfast or during fasting period. It is made by roasting wheat, rice, various daals in various combinations and mixing it with spices and onion and coriander. Make an soft dough of the flour and spices and roast it on a pan with homemade clarified butter and served hot with either coconut chutney or a big blob of homemade white butter on top… yumm… This is another Maharashtrian delicacy made from coriander leaves. Chopped leaves are mixed with various spices like chopped green chilli, ginger, red chilli powder, salt, turmeric, and asafoetida and chick pea flour to make dough which is then steamed and then cut in bite size pieces and deep fried in hot oil. Tastes heaven, when this is served with piping hot ginger tea during rainy season or cold winter evenings. Kanda poha, another easy to make, must and most served dish of Marathi cuisine. Kanda poha is a snack made of flatten rice called poha prepared and flavoured with onion, green chillies (sometimes boiled potato is also added) and turmeric, garnished with grated fresh coconut and chopped coriander leaves, served hot with a lemon wedge. Some people also have a little bowl of dahi along to reduce the level of spice. Another popular dish, usually called a pheasant dish Pitla and zunka are somewhat similar, only difference is its consistency. While Pitla is semi-liquid in consistency, zunka is in dry form. Basically it is made from chickpea flour, flavoured with onion, green chillies, garlic and lots of coriander leaves. 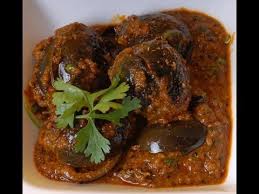 Not so spicy, but delicious accompaniment with chapatti or bhakri makes this stuffed brinjal (aubergine) a beautiful combination. Fresh coconut, dried coriander seeds lightly roasted, dried red chillies with little tamarind and turmeric ground in rough paste is stuffed in these brinjals and lightly roasted with onions and asafoetida and flavoured with jaggery and salt. This light spicy dish is a must try dish. Mostly eaten during fasting, this simple but tasty dish made from Sabudana which is small white pearls made from latex of Sago palm. Kichadi is mixture of sabudana, boiled and diced potato, roasted and coarsely powdered groundnut, chillies and grated coconut, flavoured with salt and pinch of sugar. Whereas in wada, sabudana is mixed same ingredients except coconut, made into balls and deep fried and served with coconut chutney.

These are some of the recipes which every Nashikar must taste. But if you feel I have missed any dish which I should have mentioned, please let me know by leaving a comment in box below. Little Italy Nashik was on my list for a long time but it was closed down 2014  and when got the news of reopening and an invite for a foodie meet-up, I could not

I am a researcher by heart and I love getting deep into the study of all thing that interest me. Due to which I am die hard follower off channels like National Geographic, Discovery