As we all aware that Kumbh Mela 2015 is going to be one of the biggest events in Nashik. Kumbh Mela is organised in Nasik, Allahabad, Ujjain and Haridwar. Nashik Kumbh Mela 2015 that is expected to play host to millions of pilgrims, is said to be the experiment ground for MIT researchers who want to use technology and solve all crowd-related challenges and bring a method to madness. Hence to support local administrative arrangements, MUHS has planned methods and systems for disaster management. Few fellow researchers from the  Massachusetts Institute of Technology are taking measurable efforts to find out how technology can be used to smooth the operations. We will witness a Hi-tech Kumbh Mela next year in Nashik as Ratan Tata lends support with his methods and ideas.

If this technological experiment is successful, an event in which then millions are expected to congregate will turn out to be much more smoother. The researchers had spent reasonable time in Nashik in July to understand process and loopholes in the manageen systems and identified 50 areas where technology could be used to find solutions to probable challenges during the Kumbh Mela 2015. 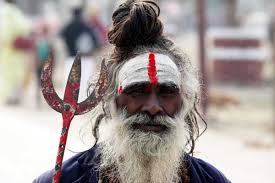 A sadhu sitting in meditation

In an unfortunate event that took place during Allahabad Kumbh Mela, where 36 people got killed in a stampede in the railway station, administration has learnt their lessons. The MIT researchers are trying to find a solution to such challenges. A Kumbhathon, will be fully supported by the Ratan Tata Trust and Ratan Tata personally has been keenly helping out the Kumbhathon, which is an MIT Media Lab initiative.

Since entire premises are going to be swarmed by people it is likely for communicable diseases to spread in such unhygienic surroundings. MIT Media Lab associate professor Ramesh Raskar shared, “The Ratan Tata Trust has helped us in a big way, and Tata himself has taken a personal interest in Kumbhathon that is trying to solve real world problems.”

According to the sources, many start-ups are also taking keen interest to work with MIT team with the initiative. “What we were looking for were ideas from various community groups which would facilitate the Kumbh Mela. We then chose problem areas that we could work on as innovators. The engineering students stepped in and took up the areas as problem solvers”, stated Sunil Khandbahale, the innovative entrepreneur who initiated KumbhaThon.

By doing workshops at different engineering colleges the MIT researchers have already interacted with engineering students and entrepreneurs to identify the problem areas.

Maha Kumbh Mela, one of the most important and notable spiritual get-togethers for Hindus in India is about to get hi-tech, thanks to a bunch of researchers from the Massachusetts Institute of Technology in Boston, USA.

Naga Sadhus or Hindu holy men raise their arms while shouting religious hymns on the banks of the river Ganges after taking the holy dip during the third ‘Shahi Snan’ (grand bath) at the ongoing “Kumbh Mela” or Pitcher Festival, in the northern Indian city of Allahabad February 15, 2013.Reuters Naga Sadhyu about to take a holy dip in the river

The first phase, which began with problem identification, focuses on identifying “50 areas where technology can be used for solutions to probable challenges during the Kumbhmela”. Let’s cross the figures and hopefully, this Hi-tech Kumbh Mela next year in Nashik and Ratan Tata technology support through MIT research scholar will create Kumbh Mela 2015 a smooth operational excellence.. Kumbh Mela tends to be night terrors for pilgrims and administrative authorities alike, with hundreds of women, children and elderly getting stranded in the crowds.