A roar from Nashik on kiss of love protest

Moral policing in Kerala coxed to a roar among the youth in Nashik. Our youths could sense the agony of hundreds of protesters in Kochi during ‘Kiss of love’ campaign and decided to vent out their dismay to support the cause.

Sometimes it takes only one individual to begin a movement that turns the tide of history. The Kiss of love (KOL) movement was sparked by ‘one individual’ from Jai Hind TV, a Malayam news channel, whose telecast turned out to be an exclusive report on alleged immoral activity at the parking space of a Downtown Café in Kozhikode, Kerala. The video revealed a young couple getting intimate and kissing and hugging each other in the parking of the cafe. A mob of attackers, who were later identified as belonging to Bharatiya Janta Yuva Morcha, demolished the café following the report.

Activists from all over Kerala then decided to protest against the series of moral policing incidents that were building up since a few years. This led to a non-violent protest by the youth against moral policing in Kerala. The youth from all over Kerala participated in the protest which was channelled on November 2 at Marine Drive, Cochin. To express unanimity to the movement against moral policing, a peaceful march was planned during which the police took around 50 activists into preventive custody citing law and order issues. Various religious and political groups also gathered in the protest ground to physically preclude the activists from hugging and kissing in public during the on-going protest.  Another protest against moral policing was steered by political activists in Bombay. This protest was a mass-kissing event held by the professors and students of IIT-B at their university lawn on November 2. A similar protest took place in the capital city, Delhi, on 8th November and in Kolkatta on 5th November.

Raghav Pareek, a youngster studying in a city college, retorted to this protest as “If the Supreme court and Delhi High court have made it clear that kissing in public is not an obscene act, then why are the political and religious parties going against it? I mean I can’t see any reason for them to stop anybody from hugging and kissing their near and dear ones in public. It is just a public display of emotion!!”

Jagbir Singh, an activist and director of Manav Uthan Manch in Nashik, is opinionated about this protest, “Our youth from Kerala are going against orthodoxy in a very strong way. The political and religious parties who are protesting against this cause are behaving like the Khakh Panchayaths in Uttar Pradesh , where they fail to understand the problems related to youth. War of extremes is going on in Kerala state, where extremely broad minded people are agitating against extremely orthodox people. This way there will always be a conflict in the society if the thought process of youth and senior citizens don’t merge. What I believe is that both the parties should follow a middle path, make the youth understand our traditional values in a better and sophisticated way and not rule out the other party on the basis of ego. You can’t even change the outlook of the orthodox people by protesting in such a way. They are gradually accepting the liberalism of the youth through various awareness campaigns conducted by youth, for instance, TV serial named Satyamev Jayate, where the youth related problems are discussed and understood by their parents. So there is a transformation in the thinking of all such institutions who want to revolt against the youth”

Shreya Gune, Chief co-ordinator of Jagar Manacha, says “This protest is against the Indian culture where youngsters are expected to follow the culture. Kerala has maximum literacy rate but it is also one of the most religious places in India, so this might not be acceptable there. Whereas in a city like Bombay, it is fair enough to hug and kiss in public. I think youngsters should behave considering their surroundings, whether you are in front of elders or with friends. Family values are important too. Mentality of people differs from city to city. It’ll be very difficult for the elders to accept the modernized culture that youth is dragging in their lifestyle. I think they should end the protest”

Tejas Chavan, an activists and president of Hausla NGO in Nashik says, “This reaction is due to frustration and resentment of the youth who are fatigued of trivial issues like moral policing in Kerala. It is a realistic revolution where the youth is trying to bring about a liberal modification in the outlook of the society. This is an extreme reaction by the youth for them to be heard by the traditionalist living in India. Their thought is good but the technique is flawed. Anger was erupted because of the violence that was pushed in by the mob of attackers whenever they see a couple in some corner of the city. It’ll be difficult for the Indian Government to condense the rage of the youth if they react on moral policing in a ferocious manner”

Sachin Joshi, an activists and director of Education on Wheels NGO states, “New generation has new rules to follow and live with. The more you suppress the youth, the more they will bounce back with a stronger reaction. If you seize the freedom of youth, they will definitely revert back to you with a revolt. Youngsters of this contemporary generation are smart and fully cladded about their behaviour in the society. They are very well aware of their behaviour in front of their elders, so never go against their thought process and try to accept their new ideas. Love and affection terms are alien to the political and religious parties who are revolting against youth in Kerala. All I want to say is that channelizing the energy of the youth is an inconvenient way to bring about a change in the society, even if it is related to love and affection in public.”

Revolt is not the solution to all our hitches. Let’s discover a solution to culminate the issues related to youth. Revolt against morality should not be hyped to this extent. Mutual understanding is the only solution we can think of to terminate such issues. Aristotle said once “Inferiors revolt in order that they may be equal, and equals that they may be superior. Such is the state of mind which creates revolutions”.

Protestors roaring during ‘kiss of love’ campaign in kochi 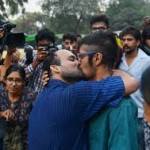 Everybody want to vent out their anger during the protest 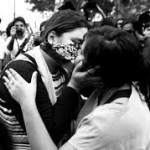 protestors expressing their love during the protest Their slogans are more expressive kiss of love protestors in kolkatta kiss of love supporters in Delhi