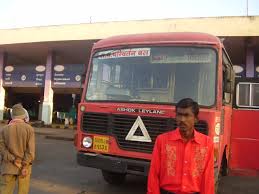 MSRTC smart card distribution in Nashik begins. For averting misuse of the monthly passes, the  Maharashtra State Road Transport Corporation (MSRTC) had earlier launched the ‘Smart Card’  scheme in the state. On Tuesday 25th February 2014, on trial basis, the scheme was launched in  Nashik when the students were given their smart passes.

As the smart card consists of Radio Frequency Identification (RFID) and a security key, the MSRTC  claimed that the smart cards will reduce the misuse. The smart card will be valid for 5-year period.  When the cardholder will deposit particular amount in the depot, the card will be recharged.

After expiry of the card, the user has to renew his card within 6 months period. Along with the card the depot will issue an identity card to the user to enable the conductor to verify the identity of the card-holder once the card is swapped.
Meanwhile, today  on 26th February 2014 the scheme was launched in the depot No 1 in Nashik. Sources said that today 700 students were given the smart cards. At present due to unavailability of machines, the scheme was launched in only one depot here. However, after availability of more machines smart cards will be distributed from all pass centres in city.