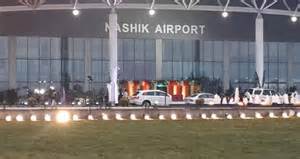 The freight services of Nashik Airport have been handled by HALCON, a joint working group between HAL, state-run Container Corporation (Concor) and Clarion Solutions.

The airport is capable of handling large aircraft such as the Antonov AN-124s following generating additional parking area and health care centres.

In 2011, HAL signed a Memorandum of Understanding (MoU) with the Government of Maharashtra to get a Rs 40 crore upgrade of Ozar airport.

Scheduled passenger air support to Nashik was restored after a gap of eight years after Air Deccan started operations to Mumbai and Pune on 23 December 2017 beneath the UDAN scheme.

After which there is so much news happening around Nashik Airport, that I dedicated to bring up this dedicated page with all the updates I can gather  from a different source.

sometimes a new route is opened up and sometimes people ask me about “how and when” questions about Nashik Airport.

Now, I decided to write a one long article containing everything about Nashik City Airport and Airport Services.

The Opening Of Nashik Airport

The  Nashik airport will definitely help in decongestion of air traffic at Mumbai — especially now when the new airport has been opened.

The situation will help the industrial, agricultural and tourism growth in the district. We understood this, and our design respects Nashik’s heritage with a shape inspired by the gateway arch and reflecting the future through modern materials like glass, steel, and metal roof.

A sense of grandeur is induced by an imposing structure and a gigantic seamless curve.

The new airport terminal connects more people across the globe to the exciting city of Nashik and provides a future of economic growth and tourism.

Due to the huge inflow of people into Nashik during the famous Kumbhmela every six and 12 years, its proximity to Shirdi sai baba temple (a popular religious destination), and strong political support, a Memorandum of Understanding (MOU) between the Government of Maharashtra and Hindustan Aeronautics Limited (HAL) was created to develop a civil aviation facility at HAL’s Aircraft and Overhaul Division in Nashik.

The Government of Maharashtra is responsible for constructing an airport terminal building, and Stantec is functioning as a design consultant for this important project.

An airport terminal is invariably conceived as a gateway to the city and is a matter of pride and symbol of growth for its people.

The state government and  Hindustan Aeronautics Ltd (HAL) have jointly upgraded the  Ozar airport at a cost of Rs 94 crore — with the state spending Rs 84 crore, while Rs 10 crore was HAL’s expenditure on the project. The memorandum of understanding (MoU) between the government and HAL was signed in March 2011.

Around six planes can land here simultaneously. The air-conditioned building has a seating capacity of 300 passengers. The runway is 3.5 km in length and 60 metres in width.

The terminal is located around 20 km from Nashik.

Road connectivity from the city to the airport has improved due to the widening of the Mumbai-Agra National Highway 3, reducing travel time from 45 minutes to 15-20 minutes.

The airport is of the greater importance of in the “balanced development” of the country.

Airports boost regional development and the construction of such an airport boasting of modern technology, architecture and facilities will only bring in more visitors and flights to Nashik and assist in the development of the region.

Some local people will drop you in share private cars at the unregulated rates (start from Rs.500 / per person to Nashik and Rs.1000/ per person to Shirdi).

The Booking can be done for charted dezire car (4 seats) from below.

All other flights to Nashik are currently on hold until further notice.

However, here is the list of flight to Nashik in the past :

My first flight to Mumbai from Nashik

My first flight booking was done on May 2017, however, my both flights to Mumbai and from Mumbai got cancelled.

Although I was not able to board a flight to Mumbai from Nashik, some of the friends were able to do so.

I recommend keeping a backup plan if you are planning to fly to Mumbai or Pune using Air Deccan services.

My first flight to Nashik from Delhi

However, My first flight from Delhi to Nashik was having a better story than my above.

What do you think, where do you want your next flight from Nashik should be? Post your comment and thoughts below