Bird Sanctuary in Nashik Is a paradise for Bird Lovers! Nandur Madhmeshwar Bird Sanctuary is located in Niphad Tehsil of Nashik district in Western Maharashtra. A stone pick up was constructed in 1907-13 across the river Godavari just below the confluence of Kodwa and Goadavari rivers at Nandur Madhameshwar. The water level is always fluctuating in Nandur Madhameshwar Lake.
The water released from Gangapur and Darana water reservoirs is stored at Nandur Madhameshwar and subsequently released from here through canals for irrigation. Silts and organic matter that are carried away with water flow are accumulated in the lake, due to which islands and shallow water ponds have been created. This resulted in the biological enriched conditions by which aquatic vegetation has been established. Thus the site has turned into good wetland habitat aptly described as ‘Bharatpur of Maharashtra”. This sanctuary is a Paradise for the Bird Lovers! At ‘Bharatpur of Maharashtra”

Spread over a protected area of about 10012 and core area near about 1765 hectares, where a large variety of water birds, resident and migratory birds congregate in  winter season. The Nandur Madhmeshwar sanctuary is now counted as one of the important waterfowl habitats in the region by the International Union of Conservation of Nature (IUCN). Nandur Madhmeshwar Bird Sanctury was created was created by the Bombay Natural History Society, World Wildlife Fund and Forest Department of the Government of Maharashtra with an aim to protect More than 240 species of birds – both resident as well as migratory birds, 400 species of vegetation, 24 species of fishes and several small mammals are located here. White stork, glossy IBIS, spoonbills, flamingo, goose brahminy duck, pintails, cranes shanks, godwits, weavers etc. are the migratory birds found here and The resident birds include Black Ibis, Spot Bills, Teals, Little Grabe, Cormorants, Egrets, Herons, Stork, Kites, Vultures, Buzzards, Harriers, Osprey, Quails, Patridges, Eagles, Water Hens, Sand Pipe, Swifts, Grey hornbill, Peafowl, etc

The major Animals found in the sanctuary includes Tigers, bear, leopards, bison, barking deer, samber, wild boar, wild dog, panthers, blue bull, hyena, jungle fowl, ottar, palm civet, fishing cat, jackal, mongoose, several species of snakes are some among the animals found here. Nearly 24 species of fishes have been recorded in the nearby reservoir. The best season to visit this sanctuary is from December  to Marcha 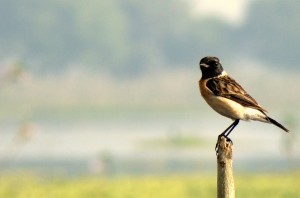 We Spotted the Common Stone Chat!

How to Reach Nandur Madhmeshwar?
1) State Transport Buses bound for Sangamner and onwards from Nashik take you to Sinner in 45 min and then you can travel through ST Bus or you can take local transport (yellow n black jeep or omani) from Sinnar but it will drop you at Manjargon. Take a walk to the left around 1.5 km there you reach at Nandur Madhmeshwar Dam. NandurMadhmeshwar is a vast area. The birding spots are as far as 5 km in Nandur  Madhmeshwar. So this mode is not convenient.
2) The next possible option is personal vehicle. In Nandur Madhmeshwar important birding locations are located in 5 km area. The road is not too good. You can park vehicle at convenient parking spot at dam side near information center or near Chapadgaon machan.
3) For the more adventurous guys two wheeler’s can be used to reach this place from Nashik. It is bit unsafe, the distance can be covered in less than 1 hour as the road is full of traffic till Sayakheda-fata & Sinnar after that traffic is not a problem. Two wheeler is convenient to cover the Nandur Madhmeshwar area.