From Germany To Nashik, With Love

Hi! My name is Tino’s Reiseblogand and I am German. I am a travel freak and love exploring different places. I would like to share my awesome visit to Nashik and the lovely experiences that followed. After spending the first few days in Mumbai, we decided to travel to Nashik. And here, we were left with the agony of choice:

As a westerner, I have learnt that the Indians preferred travelling by train and believe me, its a great bet. A 350 km route costs unbeatable 3 Euro for 2 people. I was astonished. The railway network which was originally built by the English and is very widely spread in the country. Accidents by train are quite rare. Those were also the benefits. Interestingly,no matter what, you will always find a way to convey by the train of your choice, even if that does mean that you have to sit in the timber class on the floor. But do not worry, the Ticket examiner and the numerous salespeople as well as fellow passengers on your journey will already find an “elegant” way past you.

If you want to book a seat or berth in one of the higher classes, then you can do that at a train station or on the online portal for the Indian Railway. The latter is an absolute disaster! The site is permanently overloaded. Apart from this you can see the trains 60 days in advance for reservations. The good places are so alleging out and you end up back in the timber class. So why the whole Reservierungskram? Fürn bucket! Anyway. I’ve already repeatedly crude excited about this bureaucratic madness.

The only truly practical way to get to coveted tickets to the higher classes, is the Tourist Counter at larger stations which is so really only at major stations in major cities. They have access to a tourist contingent of tickets that you can not book online. Otherwise, it is with a loving as any average Joe Indians also. It squeezes into the … right .. wood class. This way, is not as bad as initially suspected but for long distances a couch in a “Sleeper Train” is way better.

Well, there is, to eyes and through. Whoever wants to travel in India, should bring time and patience. But maybe I’m just spoiled Shinkansen. For ne 8h route in India, Japan Siche train 1 1 / 2h needs. And India is 9 times larger than Germany. So bring vieeeel patience … So here we are now , in Nashik , the third-largest with 1.5 million inhabitants city in the state of Maharastra . Nashik is known for its numerous temples and the public bath on the river Godavari Ramkund . In addition, here is one of the wichtigtsten
wine regions of India .

On the first day of our visit we visited a number of temples and then went to Ramkund. I remember, it was stifling hot that day, as almost always in India. The huge shade ducks walls of temples were a huge relief. If one takes the time and lingers in the holy places, you get to know a lot about the spiritual practices of the Hindus .

Around the Ramkund , in the middle of Old Town, Nashik hosts numerous temples .
The entire area is very sacred to Hindus. The tale goes like this, Lord Ram during his stay in Nashik at the location where the river Godavari describes a 90 turn to the right took his daily bath. The river itself is also called “The Ganges of the South”. Anyway, it was evidently much more cleaner than the original. The Ramkund is so significantly important that the Hindus even have ‘the last rites ritual’. After the ceremonial burning of the dead body, the remains are handed over to the river so that the departed soul rests in peace.

The people of Nashik  are very sociable and pally. They have the knack of starting conversations that are really engaging. Oh yes! Not to forget their love for pictures. They love getting clicked with the tourists. Sometimes I feel, we are almost out of the other side of the glass pane in the human zoo . ^^

Thank You Nashik, For all the love <3 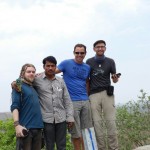 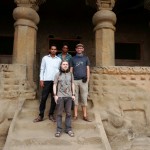 Submit Your Story As Visitor Dairy >> So as you guys know we went to the Sulafest last week. And we shot a fun 2 day vlog for you guys!!!! So in an attempt to spice up our typical Mumbai weekend, the girls and I made plans to visit the Sula Vinyards! We drink Sula like it’s water when we go to bars such My Day In Sleepy Town of Deolali

Four hours away from Mumbai tucked in the city of Nashik lies the serene and beautiful Deolali Camp. Since my childhood days I have been visiting this peaceful plce for family vacations. No wonder, it still remains close to